Master Limited Partnerships (“MLPs”) experienced a significant sell-off between February and March, marking the 5th and 8th worst months, respectively, since the beginning of 2008 for the asset class as defined by the Alerian MLP Index. Sentiment has turned extremely negative with short interest reaching nearly 80 mm shares of AMLP (the biggest MLP ETF) from just 20 mm shares at the beginning of 2018.1,2 The subsector witnessed $305mm in outflows, the largest amount since July 2015.3 Nevertheless, we believe that the energy sector, and in particular midstream energy infrastructure companies are entering the recovery phase. There are 3 main elements to our thesis: the long-term demand for infrastructure, the evolution of the asset class and the tailwinds supporting the return opportunity going forward.

The Long-Term Demand for Infrastructure

The United States is immensely “under-piped.” The Interstate Natural Gas Association of America (INGAA) estimates that the US will need between $471B and $621B in midstream capex through 2035.4 The US is truly an energy powerhouse as the second largest crude oil producer and the largest natural gas producer in the world1. According to the Energy Information Administration (EIA), the US is expected to become a net exporter of energy by 2022 due to the continued growth of US Shale and increased global consumption. This is an exceptionally noteworthy change as the US has been a net importer since 1953.5  Approximately 60% of all new liquefied natural gas (LNG) export capacity is currently being built in the United States.6 British Petroleum (BP) projects that this will catapult the US to have the 3rd largest LNG export capacity by 2020. Beyond that, its capacity can more than double.1 Ten years ago even experts wouldn’t have predicted such a transformative change in the US. The implications are still unfolding but as a leading exporter, the US has the opportunity to penetrate new markets and provide cleaner fuel to developing countries.

The Evolution of the Asset Class

The midstream space has gone through a number of notable changes in the past few years as a result of the energy market decline beginning in 2014. The first major change is the simplification of their business models. Traditionally, midstream companies have been structured as MLPs that include a General Partner (GP), consisting of the management team, and Limited Partners (LPs) that contribute capital. The GP typically had what is known as an Incentive Distribution Right (IDR), which gives the GP an enormous amount of motivation to increase the distribution to LPs. For example, the GP initially receives 2% of all cash flows from the MLP while LPs receive 98%. Over time, as the distribution grows, the GP takes a larger percentage of that cash flow. In theory, when the market reverses, the GP’s portion of the cash flow is supposed to decrease in order to protect LPs. Yet, as MLPs sold-off in recent years, this mechanism failed as GPs were not prepared for a scenario where their IDR would be meaningfully reduced. As a result, management teams across the asset class began to restructure and remove the IDR feature. Many are even converting to C-corporations. Today, only 24% of the MLP universe by market cap has an IDR, which indicates that much of the heavy lifting of this transition is behind us and we are left with simpler, self-sustaining structures1.

The other key change is the transitioning investor base. Historically, MLPs have been a retail-heavy asset class. These investors were focused on income with steady distribution growth. However, the structure was flawed as GPs were incentivized to grow their distribution network via financings from the capital markets and over-extended MLP balance sheets. Following the energy dislocation, many of these companies were forced to cut their distributions, and more importantly, management teams were forced to change the way they capitalize and operate their businesses. They’ve become less dependent on equity markets as midstream companies are shifting to a balanced approach between external and internal financing. Expected equity issuance in 2018 is $23.2B, down from $44.1B in 2013. Further, they continue to reduce their leverage ratios with the average across the sector in Q4 2017 declining to 3.9x from a peak of 4.5x in 2015.1 Today, investors are more focused on total return, rather than just yield, and require everything from strong corporate governance to low leverage and high distribution coverage. As such, retail investors have been exiting and are being replaced by institutional investors who represent 40% of total ownership today.1

The Tailwinds Supporting the Return Opportunity

The long-term story is attractive but why is now the time to buy? There are a number of tailwinds that we believe are positioning midstream companies for a recovery.   Most importantly, commodity prices have stabilized as a result of a correction from excess supply and a strong recovery in demand growth. Global demand is expected to increase by 1.5M b/d in 2018.7 Hydrocarbon volumes in the US are growing steadily which should increase the utilization of midstream assets. Overall, the energy industry is healthy. Furthermore, valuations for MLPs are at historically low levels going into a recovering market. Prices are attractive across the board, especially compared to the 10-Year Treasury and other yield alternatives. For only the third time since the beginning of 2008, both the Price-to-Forward Earnings ratio and EV-to-Forward EBTIDA ratio of the Alerian MLP Index have fallen below that of the S&P 500 Index.1 Additionally, a large portion of midstream companies are in a good place fundamentally. Although ignored by the market, many have reported strong financial results. 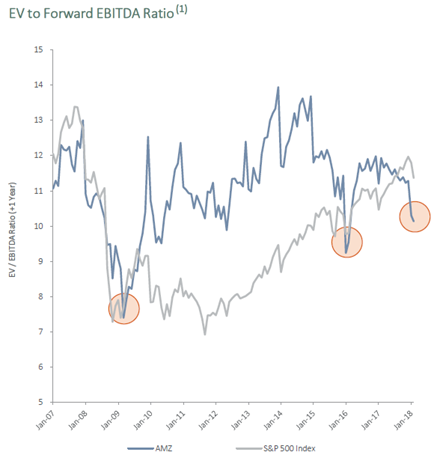 Finally, market cap weighted distribution growth is expected to return later in 2018 after declining for the last 2 years.1 Although the market is shifting towards a focus on total returns, this will add to the attraction of market participants to the space. Dividend yields may not be as high as investors are accustomed to but they should be far more sustainable due to a focus on long-term return on invested capital, and still produce attractive income.

Every investment opportunity comes with potential risks. While we are very sanguine on the fundamental opportunity for MLPs, the primary market risks include investor sentiment, commodity prices and regulatory actions:

We believe stock selection will be important in this environment as the market focuses on fundamentals. Management team execution will be a major theme going forward and asset quality is no longer the only reason to purchase a stock. An active manager in MLPs has the ability to distinguish between businesses that can be successful in this new regime and those that may struggle.  Thus, Simon Quick Advisors has been investing primarily via active managers to extract that alpha.

To conclude, we believe investing in midstream energy infrastructure is a multi-year opportunity and have maintained an overweight allocation despite the current volatility. For those not invested and exploring the opportunity, we believe current valuations represent an attractive entry point and would be happy to discuss at your convenience.

Simon Quick is an SEC registered investment advisor with offices in Morristown, New Jersey; New York, New York; Chattanooga, Tennessee; and Los Angeles, California. A copy of our written disclosure brochure discussing our advisory services and fees is available upon request. References to Simon Quick as being "registered" does not imply a certain level of education or expertise. No information provided shall constitute, or be construed as, an offer to sell or a solicitation of an offer to acquire any security, investment product or service, nor shall any such security, product or service be offered or sold in any jurisdiction where such an offer or solicitation is prohibited by law or registration. Additionally, no information provided in this report is intended to constitute legal, tax, accounting, securities, or investment advice nor an opinion regarding the appropriateness of any investment, nor a solicitation of any type. Past performance may not be indicative of future results. Different types of investments involve varying degrees of risk. It should not be assumed that future performance of any specific investment or investment strategy will be profitable, equal any corresponding indicated performance level(s), be suitable for your portfolio or individual situation, or prove successful.